Are you looking for a unique dining experience?

Park City, Utah and Laguna Beach, California are sensational communities I have had the good fortune to call home. Laguna Beach is the place where my husband, a New Yorker, and I, a native Californian, chose to purchase our first home together. It is where my children grew up, and where Mindful Cuisine began. Park City was a vacation home. Over time, the snow-covered mountains, brilliant blue skies, moose and elk, and starry summer nights stole our hearts. In the fall of 2015, Park City became our year-round home.

I was an only child of parents who shared a love of good food, cooking, and entertaining. They passed their passion on to me by including me in their kitchen adventures. While I carried this love of cooking throughout my life, it never occurred to me to cook professionally. I worked with young children as a speech/language pathologist, and later as a clinical psychologist. I loved my career and had no plans to make any changes. However, once my own children were grown, I found myself with free time and thought it might be fun to attend the local professional culinary school. I loved it! I mean, I really loved it! One night, while out to dinner with my husband, I said, "I am thinking about closing my private practice and figuring out a way to work in the culinary world." (Later on, he told me I was lucky he didn't choke or fall off his chair, he was so shocked.)

I graduated with distinction from Laguna Culinary Arts with a classical European foundation in the kitchen. I later attended Living Light Culinary Institute - a raw vegan school. I studied wine and completed the level 3, advanced course from the Wine and Spirit Education Trust.

In culinary school I began reading about food production and distribution in the U.S., which inspired an interest in growing my own food and seeking out local food. I became involved with Slow Food, an international organization with the mission to promote "good, clean and fair food for all." I chaired the Slow Food Orange County chapter and the California committee supporting the Ark of Taste - a project that aims to catalog and protect at-risk foods throughout the world that are sustainably produced, unique in taste, and part of a distinct eco-region. I worked with the Transition Laguna Beach group to build community gardens.

I set out to find my place in the world of food and eventually founded Mindful Cuisine. On that path, I taught at Laguna Culinary Arts and my home. I worked as a personal chef, did catering, developed recipes for local food retailers, and offered "underground" Basement Table dinners. Additionally, I worked as part of a Farmer and Chef team at Farm to Fork Garden Design, teaching cooking and creating farm-based dinners in urban agriculture settings.

Creating Community - An unexpected but welcome outcome of this venture into the world of food, farming, and concern about our food system was the creation of a community of cooks, gardeners, and food producers who enjoyed cooking and eating together. People formed relationships and a sense of belonging as they cooked together and gathered at the table. It was a bit magical. Now that Mindful Cuisine has been active in Park City for a while, I am excited to see that the magic is happening once again!

We remodeled a dark brown room with almost no windows on the lower floor of our home to create the Mindful Cuisine Kitchen. Through the glass doors and windows is a view of the Park City mountains. There is a patio, lawn and BBQ for summer classes. The kitchen has a big island for cooking and lots of counter space. The dining area seats 20 and has a fireplace to keep us warm when there is a blizzard outside. There is also a wine cellar. 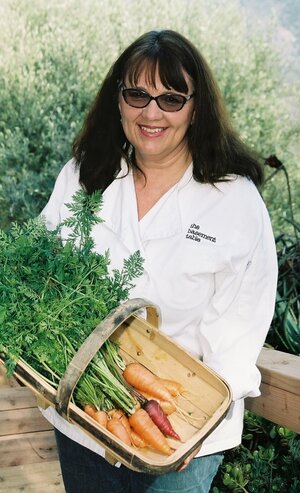